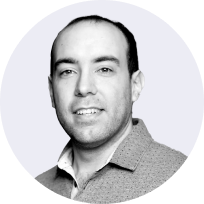 Alvaro has a lifelong passion for technology – starting from the young age of 4 when he got his first videogame.

This passion ultimately led to him becoming a software engineer based out of his home country, Brazil. In particular, he is committed to finding places where technology can improve businesses and people’s lives.He spent many years in the Localization industry within Brazil, eventually leading to him cofounding a consulting practice focused on Open Source ERP systems. These systems help small- and medium-sized companies in Brazil afford an ERP, ultimately allowing them to operate at a much higher level of efficiency.Later, Alvaro joined as VP of a US-based tech company, and he now works with a variety of early-stage startups as VP of Product at Mechanism Ventures.

At Learner, Alvaro is excited to be part of the Product team, helping unlock learning potential through mastery and passion.